Food was a lot plainer in 1841 - no pizzas, pastas or Asian takeaway. A recipe book written in 1846, called Modern Cookery (that title sounds funny now, doesn't it!) says, 'England's cookery has remained far inferior to that of nations much less advanced in civilzation'. Modern Cookery has recipes we probably wouldn't like much, like 'stewed lettuces' boiled for 'twenty to thirty minutes', and calves' feet '(Cheap and Good)'.

On the sailing ships, the food was so terrible that small children sometimes could not eat it and died of starvation. Passsengers ate boiled, salted meat day after day. Sometimes the meat had been kept in barrels so long that it went off. Many ships had a baker who baked bread twice a week, but the passengers weren't allowed to eat it fresh, in case it was bad for their stomachs! 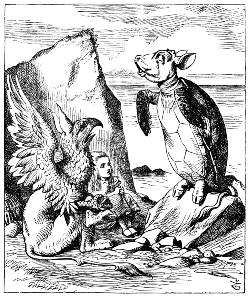 On land in Australia, most people roasted meat, or cooked stew in a pot, in front of an open fire. People in the bush, like the Greys in Letty on the Land, ate lots of mutton (sheep meat) and damper.

Richer people, like Lavinia's employers in Letty and the Stranger's Lace, had servants who could make fancier food. One Victorian dish was called 'mock turtle soup'. It was actually made from a calves head, including the tongue and the brains. The recipe is too complicated to write here! The 'mock turtle' became a character in Alice in Wonderland, which was written in 1865, not too many years after Letty's story takes place.  This is a picture of the mock turtle from the original book.

If you'd like to try out some Victorian cooking, here is a recipe for Australian damper. Or if you want to try something a bit fancier, how about a Christmas pudding?