Armies were extremely important to the emperors of Ancient China. They helped protect China against attacks by other people, including the northern nomads and the Tibetans. They also protected trade routes, such as the road that Chinese silk travelled on for sale to Ancient Rome. Quite often, armies controlled by local officials fought for the control of China itself.

The Han Dynasty is actually divided into two halves - before and after such a war destroyed the capital city of Chang-An. 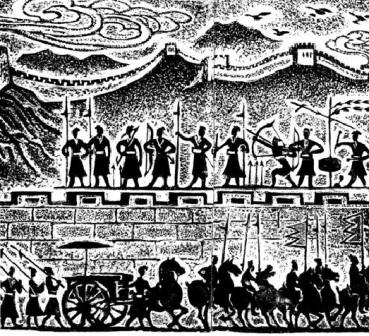 By the Han Dynasty, Chinese armies had both footsoldiers and cavalry (soldiers on horseback). Footsoldiers, like Rats-Teeth and Big Ears in Year of the Tiger, were usually peasants forced to join the army. It was possible for very capable men to be promoted, but most army officers, like Commander Zheng, were nobles.

The Han armies' main weapons were spears and halberds (a type of spear with an extra blade), bows and crossbows. Officers also carried long, straight swords made of iron, and daggers. In the Han Dynasty, iron weapons were a new development. Iron foundries were run under the emperor's control.

You can see both halberds and recurve bows in the picture to the right. Notice also the soldier beating on a drum, to tell the troops what to do. This picture comes from the wall of a tomb. The man buried inside the tomb was probably the commander of an area near the Great Wall. The carriage with the umbrella, seen below the Wall, would have been used by the commander. This is how the Tiger battalion might have looked as it marched to Beicheng in thhe novel.

The type of bow used by Ren and Hu is called a recurve bow. The tips of the bow curve back out, away from the bowman, to give extra power to the arrow's flight. The arms of the bow are strengthened with layers of wood and animal horn.

Read about the last bowmaker in China through this link.