Most towns and cities in ancient China had a wall around them. Rich people's homes also had walls around them, and even towers to keep watch. People did not feel safe, clearly, and they wanted to protect themselves - from bandits, barbarians and even Chinese armies. Part of the Chinese word for 'city' means 'wall'.

The main town in my book Year of the Tiger, Beicheng, has a wall around it too. There are four gates in Beicheng's wall: north, south, east and west.

China's most famous wall, the Great Wall, is also important in Year of the Tiger. The Great Wall runs for about 5000km across the north of China. It's name in Chinese is Chang Cheng which means 'long wall'. It was meant to protect the whole Han empire from attacks by the non-Chinese people in the north. (Picture courtesy of Penguin Australia)

China's first emperor built the Great Wall three centuries before Year of the Tiger happens. The Wall was built by linking up many older sections of wall into one long one. (The Great Wall you see in photos today was mostly rebuilt in the Ming Dynasty, about 600 years ago. But some weather-worn parts of the original Wall still survive.)

The Great Wall was built through deserts and mountains, without bulldozers, trucks, or power tools. Even wheelbarrows were a recent invention then! Workers used materials they found nearby. In some places, the Wall was made from stones taken from the mountainsides. In other places it was built of layers of gravel mixed with water and bundles of reeds (sort of like ancient reinforced concrete). Mostly it was made in layers of dirt. The earth had to be taken from at least 10 centimetres below the surface so it didn't have too many grass seeds, which might sprout. (Imagine a hairy, green Wall, like a giant caterpillar!) Each layer was pounded by teams of men with poles until it was rock hard.

The completed Wall was four to ten metres high and wide enough for several horses to ride on top. Its outside was coated with clay to make it smooth and harder for enemies to climb up. Look-outs were built into the top of the Wall, with narrow wooden windows just big enough to shoot arrows through.

Nobody liked being sent to the Great Wall. Many of the Wall's builders were criminals - hard labour on the Wall was their punishment. Life wasn't much better for Han Dynasty soldiers either. Winter was freezing; summer was scorching. Food supplies sent out to the Great Wall garrisons often got stolen along the way. And of course, the barbarians could attack at any time, so it makes a great setting for a story... 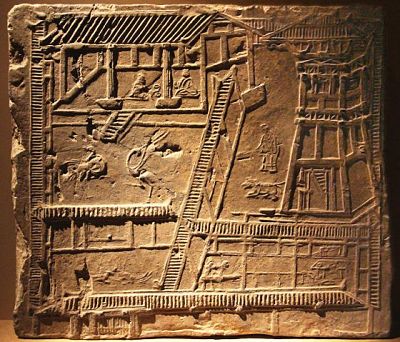 This picture of a nobleman's country house was moulded on a brick inside a Han Dynasty tomb in Sichuan. (I use this picture to imagine what the county hall in Year of the Tiger  may have looked like, only the county hall is a bit bigger, with an extra courtyard and offices. Can you find: